The Municipality of Chania and the local Council of Mournies in conjunction with the Battle of Crete and Greece Commemorative Council today hosted the unveiling of the Mournies Memorial Plaque in the central square.

The B.O.C.G.C.C. would like to thank the Mayor of Chania Mr. Anastasios Vamvoukas, the President of Mournies Council Mr. Fotis Hatzigiannelis for finding the time and the funds to finally place a plaque in the Village of Mournies depicting the memory of gunner James Zampelis, who was the only ANZAC Veteran of Greek descent that died on Cretan soil and has not been located. Thank you to Paul Soug, Eva Gotsis and Jim Claven for the work they did trying to locate the exact location, which is roughly 150 metres South West from the central platia.

The Mournies Memorial Plaque now forms part of the many memorials, sites and plaques that have been placed all over the island highliting important battles, advances, landings and resistance areas making the Battle of Crete one of the most important events in the 2nd World War. The plaque was unveiled by the Mayor of Chania Mr. Anastasios Vamvoukas, the President of the Mournies Council Mr. Hatzigiannelis and the Chairman of the Battle of Crete & Greece Commemorative Council Mr. Tony Tsourdalakis. 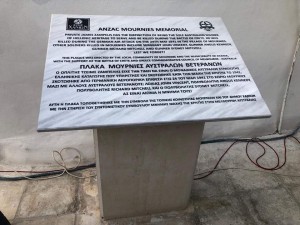