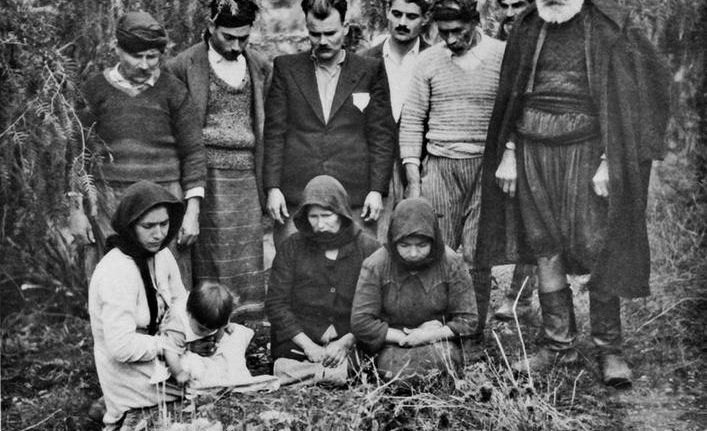 The Battle of Crete & Greece Commemorative Council (BCGCC) in conjunction with the Municipality of Maleviziou (MoM), Iraklion, Crete present the “Konstantinos Koutoulakis Photo Exhibition” at the welcome foyer of the Greek Consulate of Melbourne.

Background: In the summer of 1945 the Greek Government sent a Central Committee for the Verification of Nazi Atrocities in Crete during the occupation of the island between 1941-1944. The members of the committee were author Nikos Kazantzakis, Academy Professors Ioannis Kakridis & Ioannis Kallitsounakis and photographer Konstantinos Koutoulakis (the 4Ks as they were called).

They visited all the burnt Cretan villages and interviewed the witnesses of the massacre : The execution of the whole male population between 18-60 years old, villages plundering and burning of was the treatment of Nazi barbarism to the people that resisted and supported the partizans. The photographic archives of Konstantinos Koutoulakis have been donated to Malevizi Municipality in Iraklion and they are exhibited all over Crete and Greece.

Now…we get the opportunity to view these photos thanks to the BCGCC and the MoM. | MORE